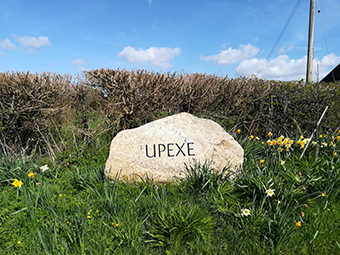 Having not done anything on the website for a good while, I thought it was about time I did something. So on a lovely Spring morning, Christine and I set off to explore our favourite branch line.Usually we like to rummage around off the beaten track, but I thought it might be nice (and easier), to pack up our bikes in the car and do a route that anyone could follow who has a few hours to spare.

We set off and drove to the Rufwell Inn near Thorverton and parked up. The pub owner came out and informed us that,he doesn't really like people who aren't customers using his pub as a carpark, but I assured him that after our bike ride we would return and sample something from his pub, which he seemed happy with. 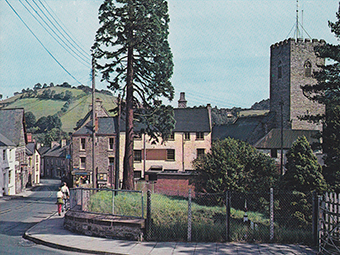 Living quite near to where Bampton Station once was,I quite often have a walk around what is now a carpark and try and imagine how it used to be when steam trains took their passengers up and down the Exe Valley.Although I can easily transport myself back in time in my imagination,the harder part is coming back to the present and realising that it is all gone and that I will never ever see it for real.

To take my mind off one of these sad little returns back to reality,I decided to further investigate around Bampton,to see if I could find anything that I might of missed.

I had recently found an old postcard of the bridge and wanted to compare it with how it is today.If you compare the right hand side of the bridge in the earlier postcard with the right hand side in the postcard in the slider,you will see that at some point,the wall has been lowered and replaced with fencing.Seeing this reminded me of the story I had heard of children,climbing on the bridge and trying to drop turnips into the funnels of engines,as they passed underneath.Maybe this fence was placed there to try and stop this game.

Many of the pictures taken looking down the track through the station were taken from this bridge,but is hard to recreate that view now as the trees and shrubs block it out. 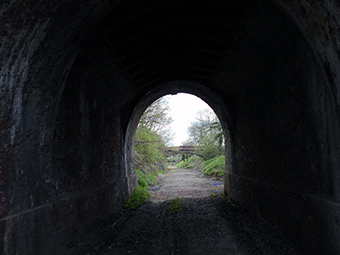 What it Looks Like Today:  The Tiverton Branch Line

The Tiverton Branch Line was originally built by the Bristol and Exeter Railway in 1848 and ran for roughly 4 and 3/4 miles between Tiverton Station and Tiverton Junction.

This made the Tiverton Branch Line very important to the local economy and the local people,as it was the main link with the outside world.

The first mile and a half or so of the Tiverton Branch Line has been transformed into a cycle way,so this stretch of the line is an easy walk for all.Near to the start of the line there is a small free carpark,which is where we parked,before setting off on our walk.